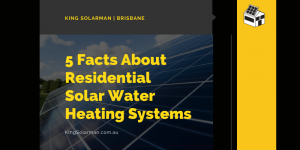 The way that we heat the water in our home is changing. A lot of people are finding that many of the barriers that kept them from adopting residential solar water heating systems are vanishing one by one. As the technology continues to improve and spread, it becomes easier, more cost-efficient, and more the obvious answer to make the switch. But you might still have a few questions about residential solar hot water systems, so let’s explore a few facts that you need to know.

They heat water directly at the flat plates or tubes

The heat collected by your flat plate cells and evacuated tubes is transferred through to your hot water storage tank.  If the system is roof mounted, the water rises naturally from the collectors through to the storage tank via a process called thermosiphon.  If the system is a split system where there is a separate tank installed at ground level, once the water in the collector has reached temperature as determined by the sensors, the circulation pump is activated to transfer or pump the water into the storage tank.  Water is recirculated from the tank to the panels.

If you live in a area which gets down to near freezing temperatures, you will need a frost tolerant or an antifreeze system.  During the colder months where hot water is not used for a while, say overnight, for example, the pipes in the flat plates may freeze.  When the water freezes and expands this can cause the pipework within the flat plates to break.  In turn, the pipework starts to leak and is unable to be repaired.  The only resolution in this situation is to replace the flat panel which can be a costly exercise.  To avoid the situation where the pipework freezes, your solar plumber should install a frost valve to prevent damage to the pipework.

Another alternative is to have a system a glycol filled or frost tolerant system.  In these types of systems there is a transfer fluid (usually a mixture of water and glycol) that is stored just beneath the surface of the flat plate collector. This liquid is heated and, just beneath, cold water is pumped in and collected, until it reaches a certain heat, at which point it is pumped into a heat exchanger. One that water loses its heat, it’s cycled back up to the collectors, making sure that there’s always sufficient heat at long as the panels are storing energy.

All homeowners in Australia can benefit

At its most efficient, solar water heating systems can make sure that your hot water gets all of its energy directly from the sun. At the very least, there is enough sun in all parts of Australia to help save some money through the use of a solar hot water system. This includes even the southern regions of Australia, the parts of the country that see less sunlight than the rest. Along the coastal and tropical regions, there are plenty of homes that can run solely on hot water provided by solar.  Most areas can run on solar in the hotter months but might benefit from a booster in the winter.

Solar hot water systems do a lot to help the environment

If you, like more and more people in the country, are getting more concerned about climate change, then taking steps to address your household greenhouse emissions might feel like your responsibility. The average household can save over 1.5 tonnes of carbon emissions per year, which is roughly the same as if you had stopped driving a small car on the road. Solar hot water systems tend to be even more efficient than solar panels that are designed to power the home, as well. Not only are you using a renewable source of water heating, but you’re helping the environment by reducing your production of greenhouse gasses.

Installing solar panels to provide the energy that powers your electrical appliances is undoubtedly a worthwhile investment. However, there are reasons that people might not want to install them, which includes how intrusive they can be. Solar technology can often require as many as 16 panels to be effective, and you might be concerned about how this affects the aesthetic of the home. However, solar hot water systems do not take up anywhere near as much space, usually only using two or three at the most, and only requiring a little space for a storage tank.  What’s more, they’re very quiet because there are few moving parts in the system as a whole.

Solar hot water systems are an investment into home value

It might not be the first thing you think about when you’re thinking about installing a solar hot water system, but there are benefits when it comes to your home value, as well. Nearly 80% of all Australians agree that a solar hot water system makes a home more valuable, and more people are flocking to buy them than ever. Nowadays, solar water heaters make up a large portion of all of the hot water systems used in the country. As such, if you want to make sure that you’re making good on the investment that is your property, not only can solar water heaters help you save on your energy bills, but they can bump up the value of the home, to boot.